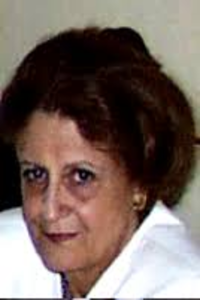 Maria Negreponti-Delivanis is a distinguished graduate of the Faculty of Law and Economics of the Aristotle University. As a scholar of the French Government, she pursued her post-graduate studies at the University of Sorbonne, Paris, where she was awarded the State Doctoral Degree (PhD) with distinction. Her doctoral thesis was published by the CNRS institute of France and included in the SEDES series. She continued her studies and research at the London School of Economics, Berkeley (USA) and at the European University Institute of Florence (Fiesole). She was a docent at the Aristotle University and a Professor of Economics at the University of Macedonia, Thessaloniki. She has also been a consultant at the Organization for Economic Cooperation and Development (OECD) in Paris, Vice-President of the International Association of French-speaking Economists, (AIELF), Vice-President of CEDIMES Institute, President of the Honorary Doctors of the University of Valahia in Romania, President of the “Dimitris and Maria Delivanis Foundation”.

She has been awarded the First Prize of the Academy of Athens for her research on the regional development of Greece. She is an honorary citizen of Komotini and has been awarded four gold medals by the Holy Metropolis of Thessaloniki as an appreciation for her social services. She was a Jean Monnet Fellow at the European University Institute of Florence (Fiesole) and was officially invited by the U.S. State Department to visit several American universities and deliver lectures. By decree of the French government and under the signature of the president of France, Nicolas Sarkozy, she was awarded the medal of the National Order of the Knights of the Legion of Honor, in July 2008. In March 2010 she was elected a member of the Scientific Academy of Bucharest. Her scientific qualifications are recognized by the numerous invitations to teach or deliver lectures that she received from several universities of Washington, New York, Paris, Rome, Bonn, Marseille, Florence, Trieste, Sophia, Bratislava, Warsaw, Cracow, Melbourne, Buenos-Aires, Cordova, Rio de Janeiro, S. Korea, Port-au-Prince, Yaounde, Almaty (Kazakhstan), Rijeca (Croatia), Fribourg (Switzerland), Targoviste (Romania), Prague (Tchechie). She has been guest speaker, organizer and chairwoman at numerous conferences all over the world. She was involved in various research projects of the following institutions: Ministry of Industry of Greece, CNRS-Paris, EKKE, OECD-Paris, NATO, Research Foundation of the Balkans –Greece, KEPE-Greece, EOMMEX-Greece, the European University Institute of Florence and the University of Macedonia. She is the author of 52 books, studies, research projects and of hundreds scientific articles in Greek, French, English, Spanish, Romanian and Russian, for which she has been awarded various recognitions of first prizes, best reviews etc. In co-operation with politically independent mass media, she has actively contributed to the formation of public opinion on the current economic issues in Greece. The thousands of students and numerous doctors she has helped to train, are academic members of Greek and foreign universities, or employed in the private and public sector.